Can it be? Yes it can - a real, live, physical event! How exciting. Celeste Bell and I will be part of the brilliant Primadonna Festival in Suffolk on July 25th, 2pm, after the screening of our film 'Poly Styrene: I Am A Cliché', discussing the film and also our book 'Dayglo: The Poly Styrene Story'.

I had a super chat with US book blogger Michelle Dunton about all things Stevie Nicks, and about my biography of the great lady herself: Stevie Nicks - Visions, Dreams and Rumours, which was released by Omnibus Press a few years ago. Thank you, Michelle, for your support!

I had so much fun talking to Foxy (DJ legend Peter Fox) on his show for the tremendously cool Deal Radio the other week. We go quite deep, and he invited me to share my top ten favourite songs that mean something to me. Expect tales of eating crisps while playing the drums for Kelly Osbourne, the mystery of my REAL first book (all about bottoms), witchery, wonder and much more. It was so lovely to speak to Foxy, he was a wonderful host and a true gentleman! And his use of sound effects is a thing to behold in itself.

You can listen to the show and interview here. 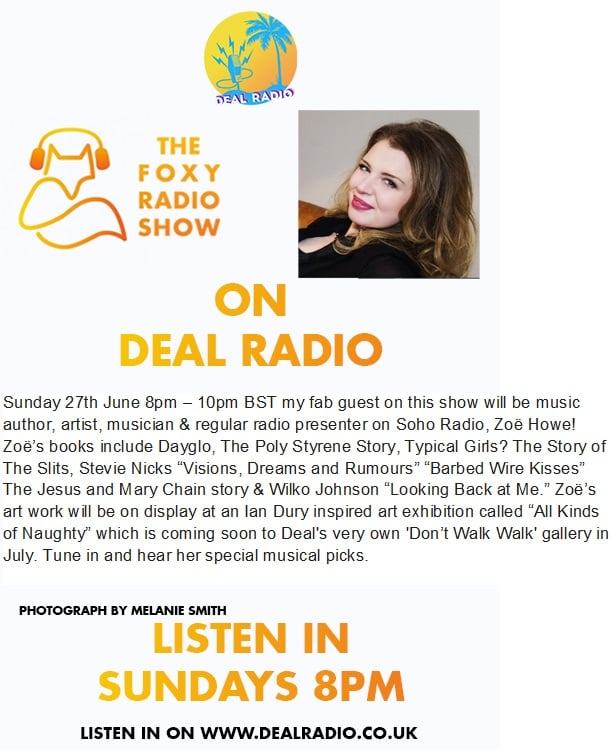 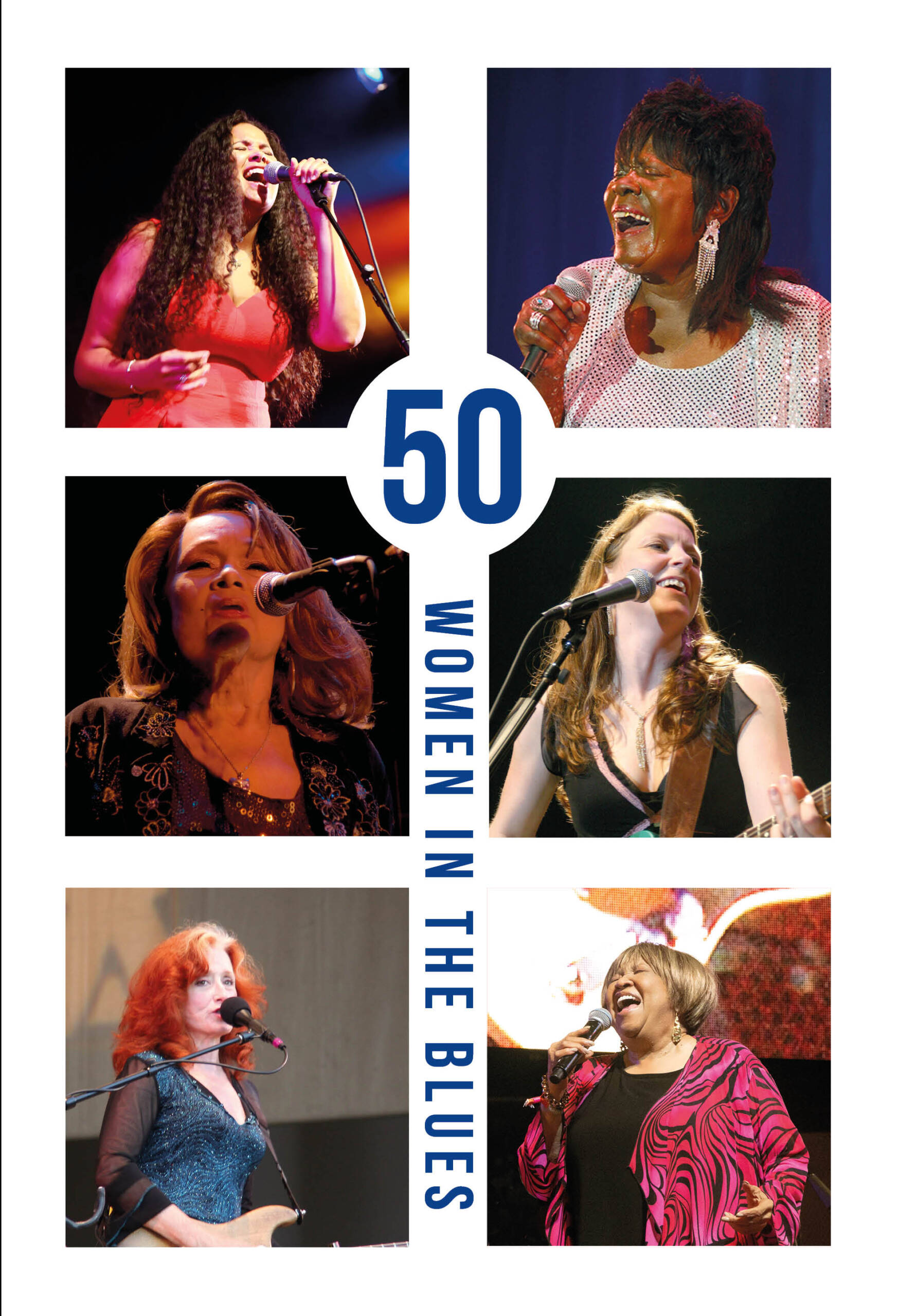 Thanks to all who caught Prof Lucy Robinson, Celeste & moi chatting Punk Women / Biography for the Sussex Festival of Ideas, in collaboration with Vivienne Westwood's Intellectuals Unite.

We discussed Dayglo, 'Poly Styrene: I Am A Cliché', The Slits, Tracey Thorn's 'My Rock 'n' Roll Friend' & Lindy Morrison, Helen McCookeryBook's ace 'Lost Women of Rock Music', Vivien Goldman's 'Revenge Of The She-Punks' and more - I'm told a link will be available for people to watch the chat.

Don't be fooled by our expressions on this picture, we really did have a lot of fun. 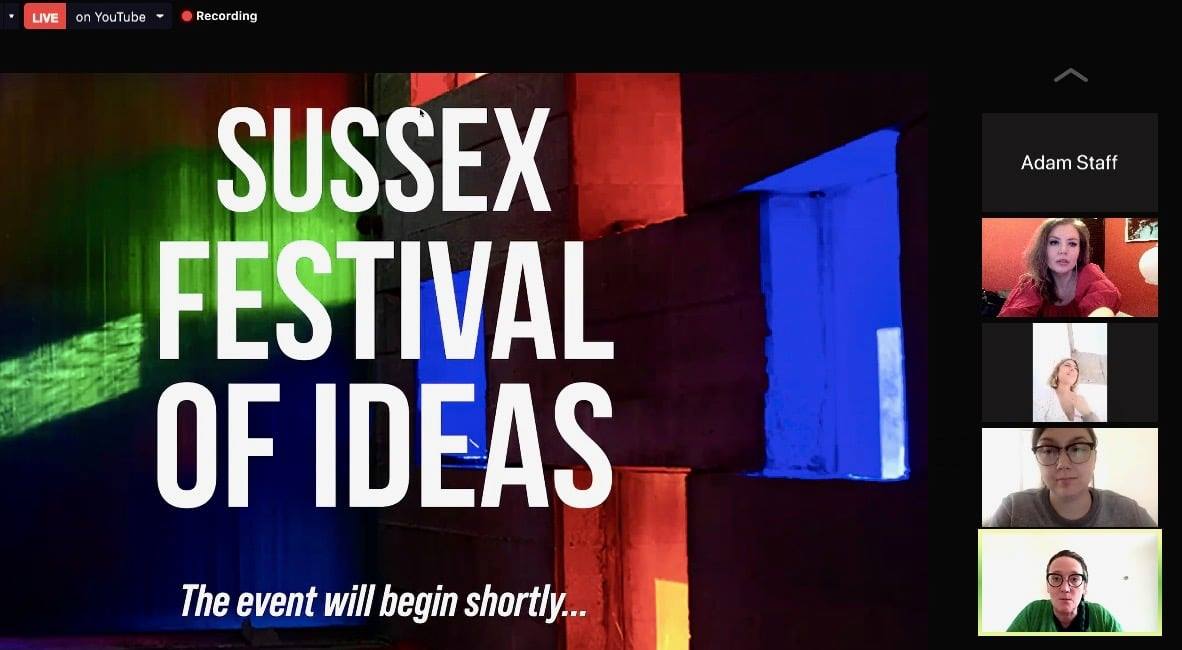 Monday June 28th, 12-2pm BST on Soho Radio NYC+Culture stream, the Rock 'n' Roll Witch show is back on the air. I'll be ringing in Midsummer with groovy medievalist, noir author and cultural polymath Kate Laity, who shares tales of Nordic summers and flower crowns, ancient charms, fairy warnings and much more besides, with the usual rock ’n’ roll magic and cultural musings woven in, and some love for Ben Edge's Ritual Britain exhibition at the Crypt Gallery in London. 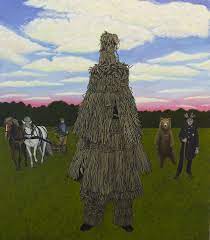 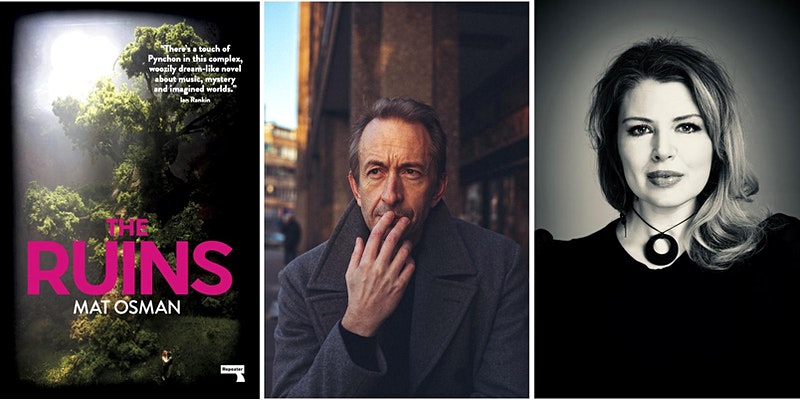 This month's show is dedicated to the power & symbolism of HAIR, magically & also politically. Guests are director Cathy Heffernan & artist Maral Mamaghani (pictured) both filmmakers with brilliant new platform Hear Art (https://hearart.co.uk), an initiative dedicated to promoting the projects of deaf creatives. They discuss their film ‘Hair Uncovered’, Maral’s use of hair in her art, hair & identity and more. 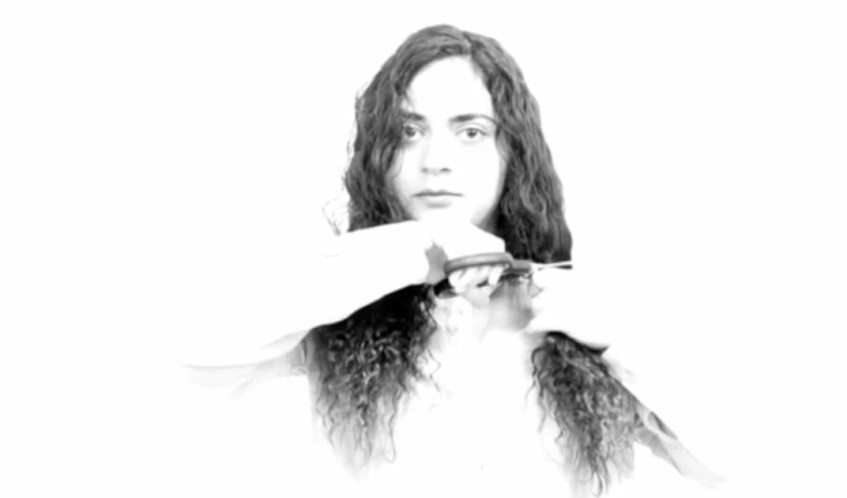 Watch my conversation with Tracey Thorn / Writing On The Wall Festival

Had a wonderful time hosting the conversation with Tracey Thorn at Writing On The Wall Festival last week. We discussed Tracey's new book 'My Rock 'n' Roll Friend' and much more besides. Watch here! 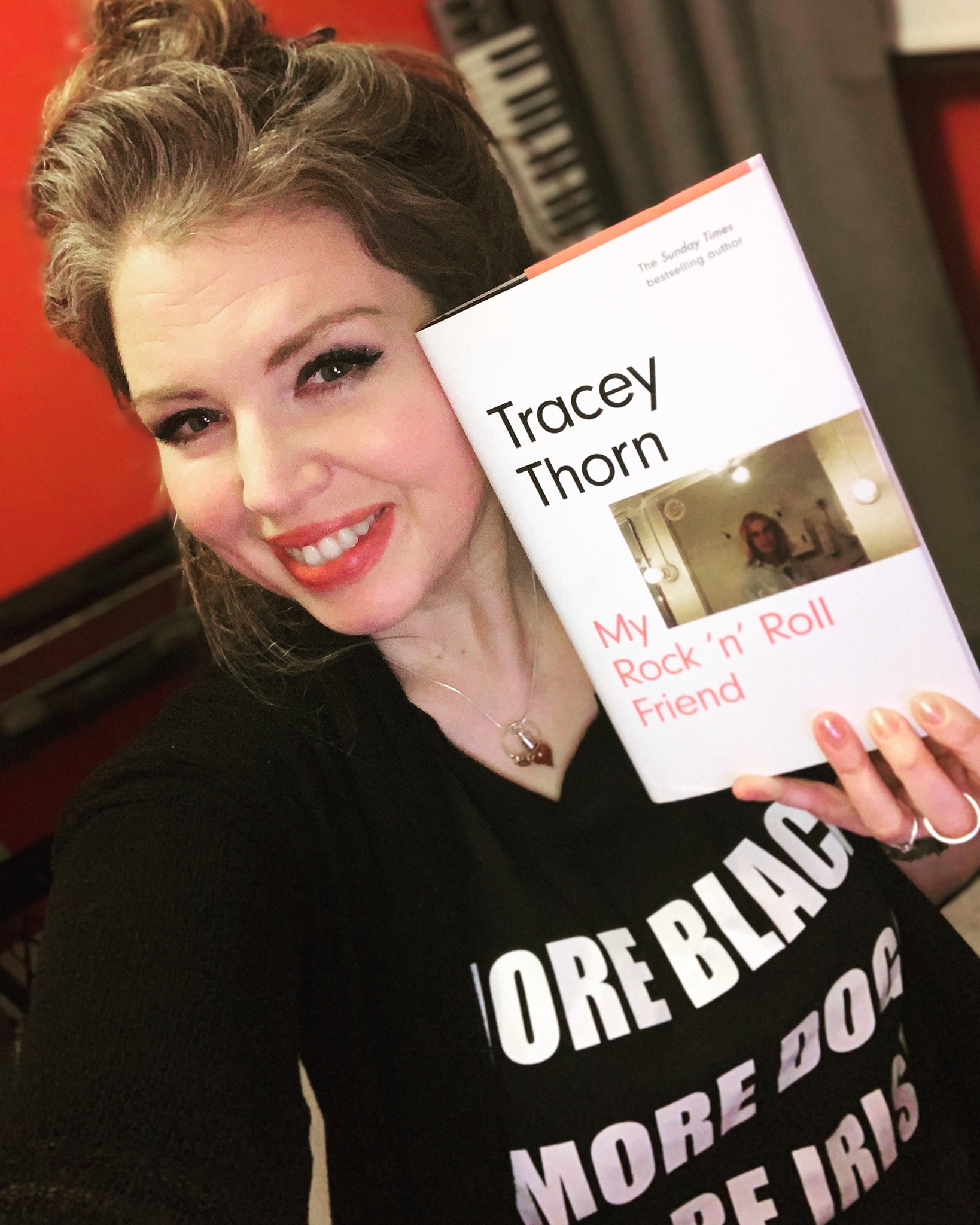 Holy Maypoles, Batman! You can listen again to Rock ‘n’ Roll Witch - the pink moon / Beltane edition - now as it is up on Soho Radio’s Mixcloud. 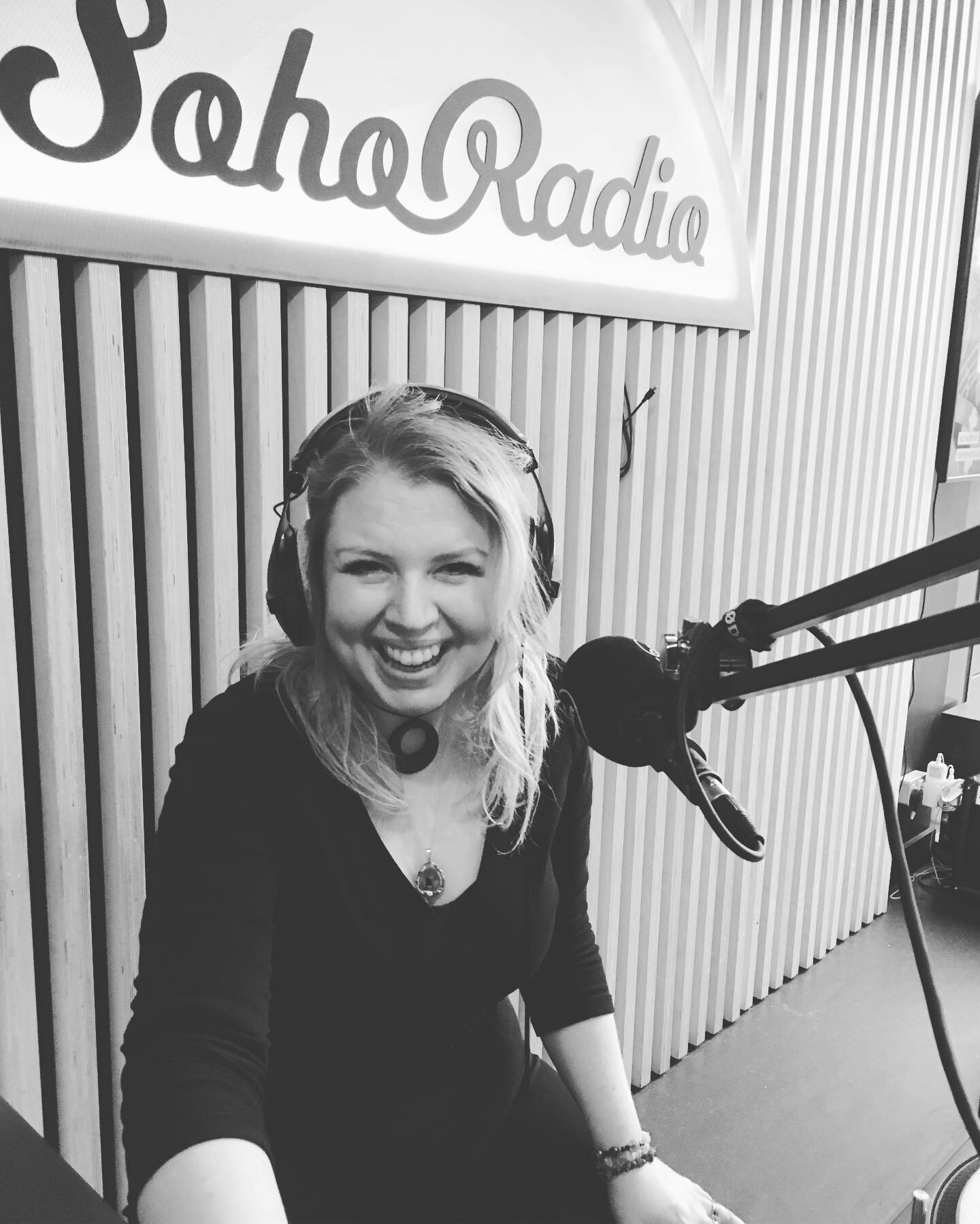 Tracey Thorn at Writing On The Wall Festival May 2021

Writing On The Wall are celebrating 21 Years of Radical Writing in 2021, and I’m delighted to be joining them again - this time hosting a chat with Tracey Thorn about her new book 'My Rock 'n' Roll Friend' on May 12th - alongside a host of other brilliant writers, filmmakers, campaigners, musicians, spoken word artists, activists and many more.

Here's a pic of Celeste and I, snapped by Jemma Street, when were at the festival two years ago, promoting 'Dayglo: The Poly Styrene Story'! 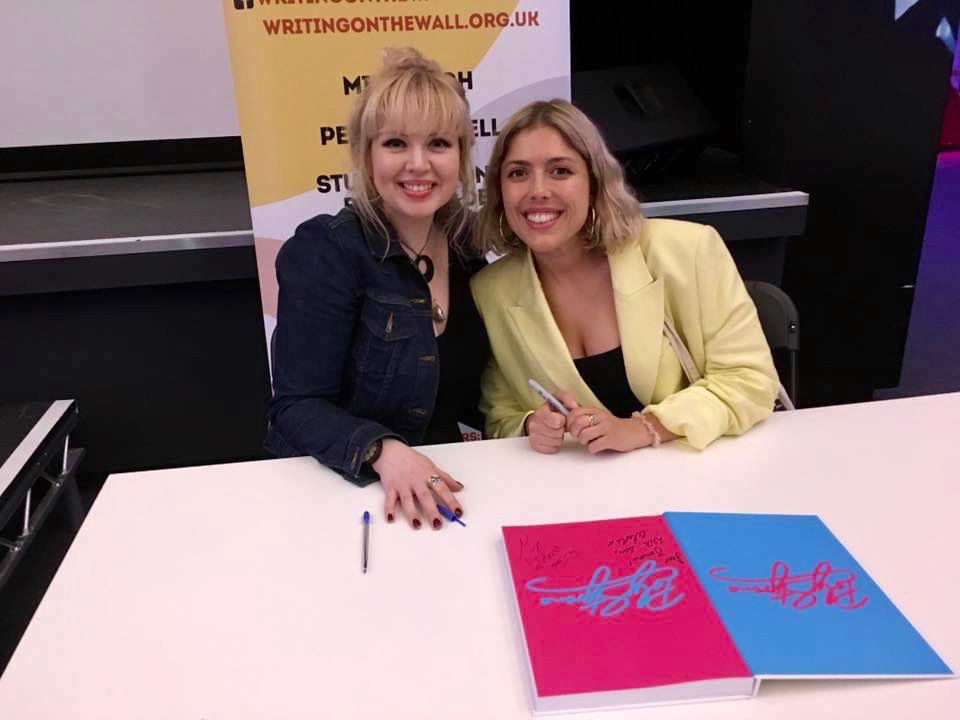 Zoë will be speaking live to Giles Brown on Talk Radio Europe about the hit book 'Dayglo: The Poly Styrene Story' and documentary film 'Poly Styrene: I Am A Cliché'. Tune in!

POLY STYRENE: I AM A CLICHÉ - RELEASE DATE!

Our documentary on the wonderful Poly Styrene from X-Ray Spex has been released! We had a fabulous preview watching party and panel event on March 4th, the day before the film hits cinemas. The panel featured directors Celeste Bell and Paul Sng, designer Pam Hogg, Art & Music Books co-editor David Sheppard, with yours truly hosting. You can watch it here.

Super proud to reveal that the historic occult book publisher Llewellyn Worldwide has signed up my next non-fiction book, 'Witchful Thinking' (appropriately my 13th book project) which will be out the second half of 2021. A bold step out of the broom closet! Stay tuned...

My first book, 'Typical Girls? The Story Of The Slits' (2009) is available again via Omnibus Press, and I've recently added an 'afterword' and some other goodies too. Order here.

Great fun to be on Word In Your Ear's lockdown extravaganza Word In Your Attic for a bit of show and tell. Dr & The Medics, Minder and Marquee Moon feature. Expect a great deal of waxing about Detective Sergeant Chisholm, one of the great TV characters of all time.

I loved hosting an online q&a for Doc 'n Roll with director Graham Bendel about his new music film 'Upstairs Planet: The Cleaners From Venus and the Universe of Martin Newell'. Watch it again here!

Truly lovely to host the Q&A for Ron Mann's beautiful music doc 'Carmine Street Guitars' for Curzon Living Room, featuring Ron himself, Rick Kelly and Cindy Hulej from the shop itself and the mighty Lenny Kaye (Patti Smith Group) who even sang me a little 'thank you' song at the end (OMG). We had so much fun. Click here to view.

Jolly nice of No More Workhorse's Killian Laher to invite me for a chat about my year. Feat a 'special dedication' to Donald Trump .... take a gander! (Last year's here - compare and contrast!)

The lovely people at Female First asked me what I'd like my readers to know about me. And I ruddy well told them. Take a read!

BAFTA-winning director Norman Stone’s 2008 film ‘Florence Nightingale’ is on, feat class act Laura Fraser as Flo, Roy Hudd (RIP), Andrew Harrison & YES, ME, playing Queen Vic. T'was a thrill to be in this production, not least because I’d already moved into writing & this would be the last thing I did in that respect, thanks to makeup artist Ann Fenton remembering me from a shoot & recommending me for an audition. Thank you Ann! Behold the trailer.

PODCAST FROM THE PAST

Thrilled to be a guest on Postcard From The Past's excellent podcast alongside the marvellous Andy Miller (Backlisted, Tilting At Windmills). The episode is called 'I've Got A Haunted Postcard Of Keith Moon' (I do) and here it is. Download them all, subscribe! You'll be glad you did.

My Lee Brilleaux book has just been featured by Shortlist as a 'great rock biography'. Thanks to Robyn Law at Blackwell's! I also joined the dashing Mark Ellen and David Hepworth for a Brilleaux / 1971 Word In Your Ear sesh at The Islington on April 12th - check out the Word podcast here.

Thanks Big Issue North for inviting me to write an 'Off The Shelf' column (it's about girls and gigs!), and to Bryony Hegarty at Louder Than War for this lovely review of 'Shine On, Marquee Moon'.

Thanks to The Muse UK for featuring me as their latest 'In Conversation With...' personage. Here's a link. I get a bit ferocious. And here's a nice interview with Penny Black Music!

Thanks to Nick Hutchings at Velvet Sheep for inviting me to contribute a 'Song For Ewe' - take a gander/a listen!

I had a great time being a guest once more on the esteemed Bigmouth culture podcast, hosted by Andrew Harrison and Siân Pattenden, alongside crime writer William Shaw. We had a hoot discussing Rosamund Pike movie 'I Care A Lot', the new album from The Anchoress, the new Zappa documentary directed by Alex Winter and much more. Listen here!

I had a lovely chat with #NewnhamNews Newnham College, Cambridge. Newnhamites (and non-Newnhamites) can find out about my background as an author & my role as the new Royal Literary Fund Writing Fellow at the historically radical and rebellious Newnham College and Selwyn College Cambridge. Includes a couple of my favourite golden writing rules as well as a mention of The Slits, Soho Radio, lipstick and my teapot. If that's not enough to hook you in, I don't know what is. Read here.

LOUDER THAN WORDS FESTIVAL 2020 IN THE YORKSHIRE EVENING POST

Thanks to Duncan Seaman for featuring my Slits book / Ari Up session with Roisin Dwyer at LTW as a 'highlight' of the weekend - much appreciated and I'm in excellent company, alongside Bob Geldof, Daryl Easlea, Lucy O'Brien, Rhoda Dakar, Don Powell, Dave Ball and many more. Read here!

Honoured to take the 'Celebrity Gloominess' spot on artist Sadie Hennessy's final 'Gloomy Sunday' radio show. I share my favourite gloomy song (well, one of them) which may or may not be Mary Chain-related. Have a listen!

Proud to have contributed the introduction to this special Aurora Metro Books publication, '50 Women In The Blues' (big thanks to Sister Cookie, Ed Mitchell and Deitra Farr) feat. the photography of Jennifer Noble. What a subject! The blues is a woman <3 https://www.aurorametro.com/product/50-women-in-the-blues/

STOP PRESS, MAY 2020: THANKS TO THE JAMC tor publishing the first chapter of my biography of the band 'Barbed Wire Kisses: The Jesus and Mary Chain Story' on their official website.

NME LISTS 'SHINE ON' IN 'OBJECTS OF DESIRE' COLUMN

Thrilled to hear that 'Shine On, Marquee Moon' has been included in the NME's 'Things We Like - Objects Of Desire' list! Should YOU desire it, click here.

My biography of Stevie Nicks - 'Visions, Dreams & Rumours - is out now in paperback via Omnibus! Check out the ace Bigmouth podcast, which features a chat about the tome. The b-format edition of 'Lee Brilleaux - Rock 'n' Roll Gentleman', meanwhile, was released with a Warners box-set this summer, sleeve-notes by yours truly.

The fab folk at Swiss music site Rockette conducted a Q&A with me based on their findings on my Instagram! Check it out here.